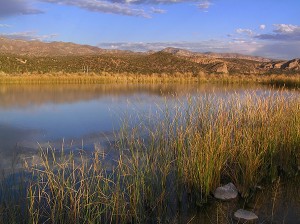 Kearny Lake, while it has been fisherman’s best-kept secret as a prime place to catch bass and catfish, has also attracted those who want a peaceful, lakeside picnic, or enjoy some outdoors with some camping, is located off of State Route 177 just outside of the town of Kearny.

After a major portion of the existing park was swept away from a flood in 1983, town  and park officials decided they would create a lake, as well as set up places for picnics and camping (with 12 campsites available). Today, the area is managed by the Kearny Parks Department, and the lake is stocked from November to March with catchable-sized rainbow trout. Other species available include largemouth bass, catfish and, of course, sunfish. Boats are allowed on the lake, although motors are limited to electric trolling motors.

It may be a small and humble recreational area, but with the seclusion its a fisherman’s or outdoorsman’s dream.