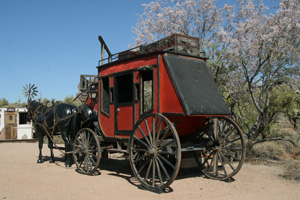 Nestled in the east valley of the city of Apache Junction the Superstition Mountain Historical Society was formed on December 27, 1979.  As a non-profit corporation under Section 501 (c) 3, funding goes to organizing, collecting, and preserving the history and legends of Arizona’s Superstition Mountains, as well as the research, education and publications necessary to preserve history.

Perhaps nowhere in the entire United States is there an area full of legend, history and intrigue as the rugged 160,000 acre Superstition Mountain range in the Tonto National Forest in Central Arizona.

Archeological evidence indicates that people were here some 9000 years ago. Later inhabitants included the Salado, Hohokam and Apache Indians, followed by Spanish explorers and Mexican Gold Miners. Early American trappers and adventurers migrated to the area and were soon followed by cattlemen and farmers. Eventually, the U.S. Cavalry was sent in to establish forts to protect this rapidly growing population.

As modern times approached, men and women began searching for what they believed was the richest gold mine in the world. This mine was made famous by Jacob Waltz, known as “the Dutchman”, who took the secret of “his mine” to the grave in 1891.

Even today, treasure hunters scour the mountains searching for the Lost Dutchman Mine, but now they share the region with campers, hikers, horseback riders and conservationists in what has officially become the Superstition Wilderness Area.