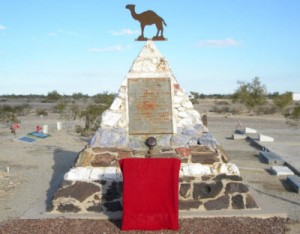 In Quartzite a special tomb holds the remains of “Hi Jolly,” or, Hadji Ali, a Syrian caretaker who received the nickname from his American masters. In 1865, Secretary of War Jefferson Davis came up with a plan to transport freight and people across the desert Southwest by means of camels. Davis eventually imported more than 70 of the beasts and along with the first batch came Hi Jolly. However, the Civil War intervened and Davis was reassigned elswhere, and without his support the project was abandoned. The camels were set free to fend for themselves in the desert near Quartzsite.

A plaque on Hi Jolly’s tomb says of the camel experiment: “A fair trial might have resulted in complete success.” Hi Jolly remained, living into his seventies. The locals were so fond of him that, after he died, they spent several weeks building Hi Jolly a pyramid tomb made of multicolored petrified wood and quartz. It was dedicated on Jan. 4, 1903. Thirty-three years later the Arizona Highway Department came along and cemented a bronze plaque to the tomb, telling Hi Jolly’s story, and topped the pyramid with a metal camel silhouette.

In those long-ago days the Quartzsite cemetery was remote, just bare ground and a few scrubby sagebrush at the edge of an obscure desert outpost. Now you have to drive through a bustling Quartzsite market area to get to Hi Jolly. Still, his tomb is the largest figure on its tiny patch of desert solitude.

On a side note, the camels outlived both Davis and Hi Jolly, and their last reported sighting was in 1942