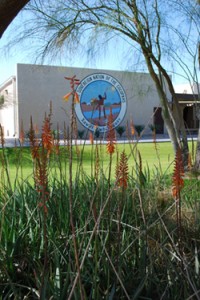 The Cocopah (Kwapa), also known as the River People, have long lived along the lower Colorado River and delta. For centuries, the Cocopah people, described as generous and non-materialistic, have maintained their traditional and cultural beliefs through the various political environments and ever-changing landscapes.

Cocopah history will come alive as you traverse the Cocopah Museum’s walls. The museum, which was built in 1996, is a recognized federal repository. Its exhibits feature objects and depictions of Cocopah history and culture.

The museum is surrounded by a 1.5-acre park that features native trees and plants and a traditional dwelling replica made from natural elements.

The Cocopah Indian Tribe is one of seven descendant Tribes from the greater Yuman language-speaking people who occupied lands along the Colorado River. Cocopah Tribal ancestors also lived along the Lower Colorado River region near the river delta and the Gulf of California. The Cocopah people had no written language, however, historical records were passed on orally or interpreted in documents written by outside visitors.

Learn more about the tribe by visiting the museum. While you’re there, take a piece of their history home by purchasing authentic Cocopah beadwork, Native arts and crafts, Native American music, jewelry, novelty items and more at the gift shop!