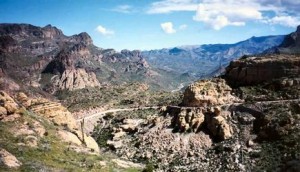 Just east of the city of Mesa, turning off at State Route 88 (Idaho Road) from State Route 60, is the historic Apache Trail. The 42-mile long trip offers a bumpy, back-door, Salt River route from Apache Junction, on the eastern outskirts of Phoenix, to Theodore Roosevelt Lake and then on to the mining town of Globe. The paved portion of the Apache Trail leads past a ghost town, a gold mine, a desert mystery and a cliff-sided lake.

Beyond the city lights and nearby residents of the East Valley, the Sonoran Desert  on display with yuccas and saguaros can be seen as you make the journey down a roller-coaster descent to a robber’s refuge, past a lazy lake, through a river canyon, and on to the extrinsically constructed dam, which paved the way to what Phoenix is today.

Patient drivers with no fear of heights are rewarded with three awe-inspiring desert lakes and the history and mystery of thousands of years of human adaptation to a volcanic landscape of drought, shard and thorn. The road, completed in 1905, initially used to aid in the construction of Roosevelt Dam, offers a jagged stretch of the Salt River, which first nourished a thousand years of Salado civilization, receives its waters from the White Mountains and the Mogollon Rim country.

The route continues to amaze with its rich history as you are lead past the touristy ghost town of Goldfield and then to the rugged Lost Dutchman State Park. Goldfield enjoyed a flurry as a gold-mining town in the 1890s when a rich gold strike supported a population of up to 5,000, and yielded about $1.5 million in bullion before the mine shafts flooded and the ore played out in 1897. The town revived a few years ago as a tourist attraction, with reconstructed buildings, exhibits and a simulated mine tour. The Mammoth Steakhouse and Saloon caters to meandering visitors, actors put on weekend gunfights, and mine tours offer a glimpse of the deadly life of a hardscrabble miner.

Apache Lake comes into view from a striking vista point. Protected by the harrowing drive and the minimal facilities, Apache Lake offers excellent fishing and some of the best lakeside camping opportunities in central Arizona. It has a marina, complete with boat rentals, a restaurant, fishing shop and motel rooms, but remains much less developed or visited than Canyon Lake. When full, Apache Lake stretches for 17 miles and measures 266 feet deep, although drought has lately lowered lake levels. Isolated stands of cottonwoods, accessible only by boat, provide good camping spots.

Roosevelt Dam. After a succession of floods and droughts repeatedly debilitated a string of farming communities along the Salt River in Maricopa County, a coalition of politicians, farmers and others convinced the federal government to build a massive dam on the river to control floods, store water and generate power 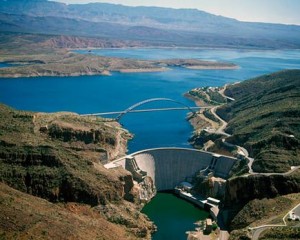 Photo Courtesy of US Bureau of Reclamation

Faced with the floods and droughts, early Phoenix farmers pressed the federal government to build the dam that launched the reestablishment of the West. Roosevelt Dam created what was in 1911 the world’s largest artificial lake – Roosevelt Lake with a million-acre-foot capacity, a depth of up to 190 feet and 89 miles of shoreline. Wrestling the 344,000 cubic yards of masonry into place in the remote, flood-prone canyon proved unexpectedly dangerous. During construction, relying on an innovative 1,200-foot-long cable line with iron scoops that could hold 10 tons of rock and mortar, 42 men died.

Decades later, an analysis of the growth rings on ancient trees in cliff dwellings scattered throughout the Salt River watershed disclosed that the Salt River could generate much larger floods than the original dam engineers had anticipated. The discovery triggered in 1996 a $430 million upgrade of the dam, boosting its height 77 feet to 357 feet. The work included a $21 million, 1,080-foot-long bridge that stands as the longest, two-lane, single-span, steel-arch bridge in North America. The bridge, like a giant outstretched arm, reaches across the canyon of Roosevelt Lake, taking traffic off the top of the dam, which was barely wide enough to accommodate two Model T Fords abreast. Engineers significantly lowered the level of Roosevelt Lake during the project, and Arizona State University archaeologists conducted a series of archaeological digs around the lake. They found a huge complex of buildings that accommodated Salado farmers who irrigated with canals.

While it’s still unclear why the Salado Natives abandoned their homeland, this piece of mysterious history is tied into the rest of the amazing sights and antiquity – all on display along the Apache Trail.