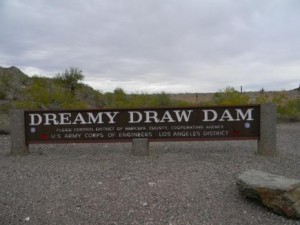 Like the lore of those mysterious Phoenix lights, some things are just more amusing when left unexplained. The Dreamy Draw Dam is possibly one of those things. Located on the side of Piestewa Peak, Dreamy Draw is a recreational area in the city of Phoenix, providing the perfect location for laid-back hikes and family picnics. What makes Dreamy Draw just a little more interesting is its supposed background in an alien-associated account. Just weeks after the theoretical 1947 spaceship sighting in Roswell, New Mexico, a flying saucer reportedly crashed right in Phoenix’s backyard at the Dreamy Draw. Many believe the Dreamy Draw Dam was constructed to keep onlookers from discovering more about the believed extraterrestrials.

In the early 1900s, the area of the Dreamy Draw was found to have cinnabar, a type of mercury sulfide, and for years, served as a mining site. Because of the toxicity of the mercury, many of those miners experienced sickness, including hallucinations. Many others believe that the alien life forms just stemmed from the imaginations of those working near the site.

Several theories remain about the supposed UFO visit, but one fact remains true: Dreamy Draw offers plenty of recreational activities that are out of this world. 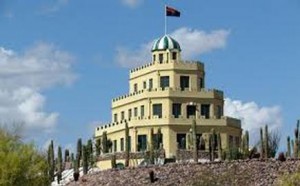 The Tovrea Castle is not like the castles that were built in the Middle Ages. The walls of this castle don’t tell tales of nobility. Instead, these walls tell tales of unfulfilled dreams.

The castle, which today resembles that of a traditional wedding cake, was built by Italian immigrant Alessio Carraro. In 1928, Alessio moved to Arizona with dreams of developing a resort destination and housing subdivision known as Carraro Heights within Phoenix. The centerpiece of his vision was a hotel, which is the main structure we see today.

The Castle was bought by the Tovrea family and eventually by the city of Phoenix. Today, visitors of the castle can tour its gardens; walk-in tour requests are based on availability only. There are no tours in the months of July or August. 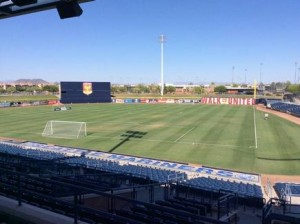 The World Cup may be over, but the soccer sensation is alive and well in Peoria, Arizona. Keep that momentum of cheering for your team by heading to the Peoria Sports Complex to catch a match of the United Soccer League’s Arizona United Soccer Club.

In early spring, the complex serves as the spring home to the Seattle Mariners and San Diego Padres Major League Baseball teams. It also is a community gathering place for special events like the Peoria All America Festival and Halloween Monster Bash.

For the summer months, the baseball stadium becomes a soccer field where Arizonans can experience World Cup fever all summer, every summer. So come on out and cheer on the Arizona United as they continue their season through August! 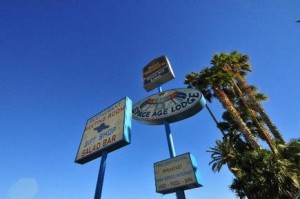 There are just some things that can’t quite be described as any other way than just “Uniquely Arizona.” The Space Age Lodge and Restaurant in Gila Bend is one of those places. Where else, but Arizona, could you be driving down the street of a small town, and happen upon a hotel beneath a giant, plastic UFO?

The landmark hotel opened in 1965 and was designed by Al Stovall, a metal and plastic supplier during World War II, said to have been good friends of President Eisenhower. Stovall created five futuristic-themed lodges, including the Space Age Lodge at Disneyland and others in Anaheim, California. The Space Age Lodge in Gila Bend is the only one rmaining with the originally intended appearance. 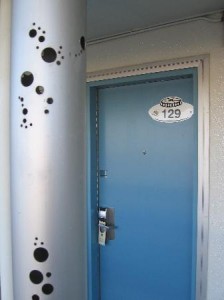 The hotel came under new management in the late 1970s and Best Western did a renovation in the mid 1980s to update its look. In 1998, a neon sign shorted, caught the restaurant on fire and nearly burned the structure to the ground. But the restaurant and hotel were renovated, keeping the original space exploration theme. A new flying saucer was added and murals were painted in the lobby. The rooms of the hotel feature space art and photos from NASA exploration.

Travelers looking for something a little different or Arizonans looking for a unique weekend getaway, will be spending time in Gila Bend, but enjoy feeling like they have just landed on the moon.

The Fountain Hills Fountain helps bring people together. Given that it is shoots as high as 330 feet (560 feet at its highest), the white plume of the fountain is visible far beyond Fountain Hills.

The Fountain operates each hour on the hour for 15 minutes from 9 am – 9 pm.

When the Fountain operates at night, lights illuminate the plume from top to bottom. There are lights installed on the concrete fountain head that not only light the structure itself but also shine up on the rapidly ascending stream of water.

The Fountain helps remind people the connection between them, even when far away. When you look at the Fountain, you can be comforted by the knowledge that someone else has their gaze fixed on it, too. 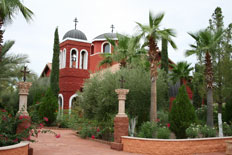 In the summer of 1995 six monks arrived in the southern Arizona desert to establish St. Anthony’s Monastery. They carried with them the sacred, millennial heritage of the Holy Mountain, Athos. The monastery is dedicated to St. Anthony the Great, the father of monasticism, the renowned 3rd century anchorite

Visitors of the Monastery will gain insight into the monastery lifestyle. St. Anthony’s Greek Orthodox Monastery follows the coenobitic rule of monastic life: a brotherhood of monks and novices holding all things in common follow a daily schedule of prayer and work under obedience to the abbot, their spiritual father. The monks’ daily program begins at midnight with personal prayer time and spiritual reading, followed by the cycle of morning prayers and the Divine Liturgy. After a light breakfast and a rest period, the monks begin their work day, attending to prayer and their tasks till evening. Tasks include, among others, construction, grounds keeping, vine dressing, gardening, woodworking, publishing, food preparation, and offering hospitality. The day ends with evening Vespers followed by dinner and Compline. 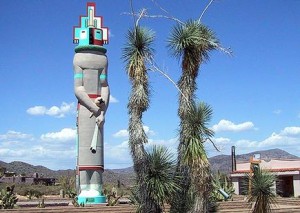 Kachina Dolls (or Katsina) are a unique Hopi invention. Kachinas are made by Hopi craftsmen who’ve honed their skills over several years. The masked religious icons are carved from cottonwood root, and they were used to teach children of the tribe about the spirit world. 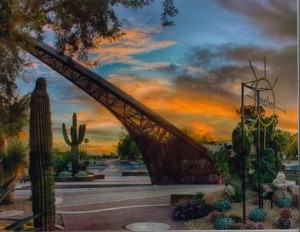 The famous carefree sundial was designed in 1959 by Architect Joe Wong and solar engineer John I Yellott.  To create a huge sundial at a time when sundials were outdated was a very bold move of Wong and Yellott. To many, this move serves as a reminder of how important time and our created perception of  it has always been and always will be.

The sundial, which points to the North Star, is made from a steel frame and covered in anodized copper. It measures 90 feet in diameter. The metal gnomon, the shadow-casting portion of the dial, stands 35 feet above the plaza and extends about 72 feet.

The sundial also acts as the starting point for the self-guided walking tour of the Carefree Desert Gardens (CDG), if you’re up for an added adventure.

The sun’s shadow has made its way around the Carefree sundial many times since its initial creation in 1959, and will continue to do so for many years to come. Venture out this summer to the sundial so you can be a part of one of the sun’s daily rotations.