Study ranks Sierra Vista as one of best small cities 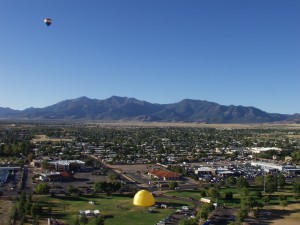 NerdWallet ranked Sierra Vista as one of the best small cities in the nation based on economic health, affordability and quality of life, in a study published on June 1.

Out of more than 1,300 cities with a population of less than 75,000, Sierra Vista is ranked 44, making it the top Arizona community on the list. The study ranked cities using data from the 2007 and 2013 American Community Survey conducted by the U.S. Census Bureau, giving equal weight to the three categories considered: affordability, economic health and quality of life. 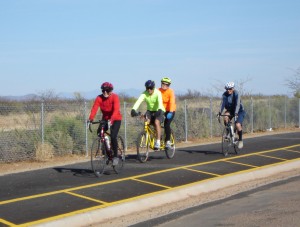 “I’m not surprised to see our community recognized for what those of us who call it home already know—Sierra Vista is a great place to live, work, and raise a family,” Sierra Vista Mayor Rick Mueller says.

In an April, 2015 analysis, NerdWallet also ranked Sierra Vista as one of Arizona’s top 10 places for young families.

The key attributes identified by NerdWallet also surfaced in the City’s own recent community survey that is being used to develop a concise and memorable brand message.

“Sierra Vista is filling its economic development toolbox with vital elements like this research, along with the brand messaging and powerful collateral, all of which work in unison to help make our community vision a reality,” Jacobs says.

New Year – Get Outside

New Year’s Resolution – Get Outside!
This is the time of year that we relish after those long, hot, tortuous days of summer. Why not make a New Year’s resolution to get outdoors and enjoy your city or town? 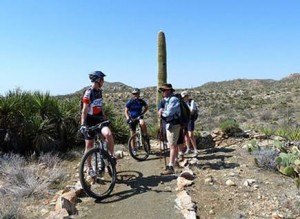 If you’ve got sunshine in southern Arizona, a hike up a mountain trail is the perfect way to spend your winter afternoon. The Town of Marana has numerous outdoor recreation opportunities, including more than 30 miles of trails in the Tortolia Mountains. The Town offers free Saturday morning guided hikes for individuals to get exercise, have fun and meet fellow hikers. Put it on your list to breathe in the fresh air and join them for one of these events!

City of Mesa has a way to get outdoors and support a great cause! Their sixth annual Run, Walk & Roll 5K/10K is being held on Saturday, Jan. 10 at Mesa Riverview Park. Participants of all ages and ability levels are encouraged to sign up. The race will bring together the entire community to support sports and recreational opportunities for individuals with disabilities. For more info or to register, visit www.RunWalkRollAz.com. Be sure to check our Mesa Parks & Recreation for even more outdoor opportunities to start 2015 off right! 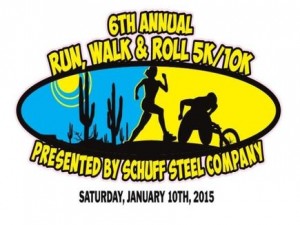 If a relaxing afternoon in the park is more your speed, look no further than the City of Surprise’s 2nd Sunday in the Park. Enjoy an afternoon at the park with live musical entertainment on the second Sunday of each month. The free family event is fun for all ages. Upcoming shows will be held on Januray 11, February 8 and March 8. Click here to find events happening in Surprise all year long! 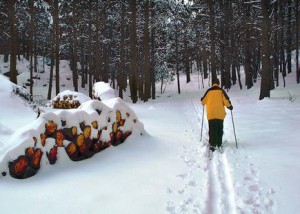 And don’t forget about SNOW! Northern Arizona and the White Mountains have plenty of opportunities to ski, snowboard and build snowmen. Check out the Great Arizona Road Trip for more ideas for cold weather adventures and year-round activities! 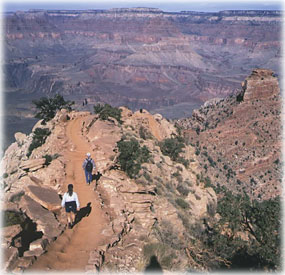 For those who wish to experience the Grand Canyon in a unique and rewarding way, hiking the canyon via the South Kaibab Trail is a fun experience.

The trail offers panoramic views and it holds very true to a ridgeline descent. An exhilarating sense of exposure is offered, but there is little shade and no water for the length of the trail.

This trail is the quickest way to the Canyon’s bottom of all the trails offered by the Grand Canyon. It’s a hard way back up to the top though, so you can always switch trails if you want an easier uphill battle.

Located near the city of Page, Glen Canyon Dam is the impressive site of a plant that generates more than 1.3 million kilowatts of electricity with each of the 40-ton steel shafts turning at 150 rpm, generating nearly 200,000 horsepower. Since 1956 when the first blast was set off to begin building the impressive 3,700-foot dam, with all eight generators operating at full output, more than 15 million gallons of water will pass through the power plant’s penstocks each minute. The electricity is upgraded on a transformer deck from 13,800 volts to 230,000 and 345,000 volts for transmission to distant markets.

Visitors may tour the historic project free of charge beginning at the Carl B. Hayden Visitor Center perched above the lake and power plant. Kids will enjoy the guided tour featuring video, photography and Native American artifacts.  This is an excellent family activity and one that should not be missed where you can plan to spend anywhere from 1 to 2 hours taking in the views, and exploring the history.

The tour begins at the Carl Hayden Visitor Center where an elevator will take you 528 feet deep into the interior of the dam. One stop along the tour is the gallery where a digital counter registers the money collected from the sale of power.

While visiting the dam, you may also be interested in the recreational facilities in the surrounding area: 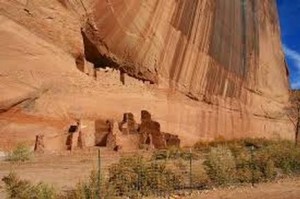 The White House Ruins Trail leads to The Canyon de Chelly. The Canyon de Chelly contains over 2500 archeological sites ranging from 1500 B.C. to 1350 A.D. Among these sites are several hundred Anasazi Indian villages built between 350 and 1300 A.D. Today, Canyon de Chelly sits in the middle of the Navajo Indian Reservation and is home to many Navajo who live in and utilize the canyon’s resources.

There’s only one Canyon de Chelly hike that the general public can take without a Navajo guide and that’s the 2.5-mile trail to White House Ruins.

Those who do take on the challenge of the hike will find that it’s worth it. Once the hiker’s trail hits the bottom, there is a foot bridge available to cross the creek that is often dry. Hikers will be surrounded by Navajo merchants who are selling their jewelry and other ware. When hikers pass the merchants, they’ll finally get to the ruins where they’ll get to bask in the history of the Anasazi who once occupied the area and of the Navajo who still occupy it today. 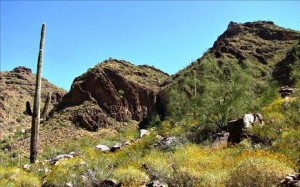 ‘Help us protect the land, history and wildlife’ is the motto for the more than 10,000-acre southeast Valley park of the lower Sonoran Desert. The park ranges in elevation from about 1,400 feet to over 2,500 feet. Goldmine Mountain is located in the northern area, with a spectacular San Tan Mountain escarpment in the southern portion of the park. Near the town of Queen Creek, the San Tan Mountain area is an ideal location to enjoy a part of the Sonoran Desert and truly appreciate the desert habitat and its wildlife, where vegetation changes from creosote flats to dense saguaro forest. Various types of wildlife may be observed, including reptiles, birds, and mammals. Amenities are slated for future development.

Don’t forget to stop by the Visitor’s Center to pick up educational tidbits, purchase souvenir items, visit with park staff, and see the wildlife exhibits or tortoise habitat. Restroom facilities are available and additional amenities are slated for future development. 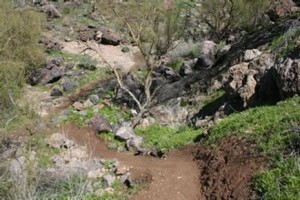 Photo Courtesy of City of Peoria

Considered an “advanced trail,” the 2.9-mile route on West Wing Mountain, located in the city of Peoria, starts at the northwest intersection of High Desert Drive and Higuera Drive, has been improved from the original version to make this hike even more interesting and scenic. The best modification that was made to this new route is that it seldom overlaps the same walking path except on your return trip down the hill. However, you will find out that the most difficult part of this advanced hike is within the first mile of the hike. Be prepared to climb to the mountain’s highest point with a few steep inclines along the way. Then, get ready to enjoy the remainder of the hike with panoramic views.

Another deemed “extreme” trail begins at same northwest intersection of High Desert Drive and Higuera Drive, where a sign indicates the trailhead for the 3.5-mile trail. The route has been modified from its original version to make this hike even more extreme and difficult. The advantage of this new route is that it seldom overlaps the same path, except at the most interesting part of the hike, and on your return trip down the hill. So build up your stamina, because this one is going to challenge you.

If you haven’t experienced it yet, it’s time you did. The trail head for Sunrise and WestWing Mountain includes off-street parking, restroom facilities, and chilled drinking fountains from 6:00 a.m. to dusk.  The New River Trail is designed to accommodate all non-vehicular users, including walkers, joggers, strollers, bicyclists, roller blades, and equestrians.

Enjoy your hiking experience: play by the rules; hike safely; be courteous of others; and please keep Peoria’s mountain spaces clean. 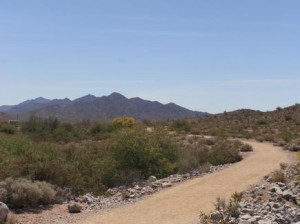 Estrella Mountain Regional Park, located in the city of Goodyear, offers more than 33 miles of trails for hiking, mountain biking, and horseback riding. Park Trails range in length from 2.3 miles to 8.8 miles and range in difficulty from easy to strenuous. If you are looking for an easy, relatively short hike, the 2.4 mile Baseline Trail is recommended. If you are looking for a long, all day hike, the Pederson Trail encompasses 8.7 miles.

Hiking and riding trails are easily accessible via trailheads located at the arena and amphitheater. A mountain bike trail brochure that categorizes trail difficulty is available at the park office. Visit Estrella’s Trails page for a complete list of trails and distances, and park hours.

Always remember to carry plenty of water and let someone know where you are going. 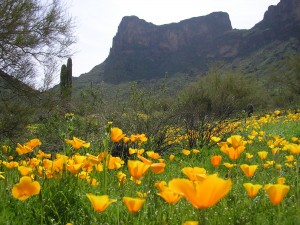 Just south of Eloy, Picacho Peak has been used as a navigational landmark for hundreds of years, and was the site of Arizona’s only Civil War battle. The 3-mile round trip stretch has been rated as “moderate” by most hikers due to its well-maintained trail and easy walking with trail elevation in most areas with only one steep section aided with steel handrails and cables. While on the trail you can expect to see an abundance of wildlife, enjoy the natural surroundings away from all the bustle of the city, as well as possibly a glimpse of petroglyphs from the historic Hohokam tribe.

With the ease of the trail, one can take the time to appreciate the view, mixed with a little bit of history, and a 360-degree breathtaking view of the surrounding Sonoran desert, what’s not to love?

The park re-opens to the public on September 13. Catch some practice hikes in the valley and then hit the trail just as summer starts to turn to early Arizona fall.

Photo Courtesy of the City of El Mirage

El Mirage is the perfect place to enjoy a day full of sunshine at Gateway Park.

Located directly off El Mirage road, the 13-acre park has something for every member of the family. Multi-use fields serve as the hub for team sports, and a ½-mile path awaits runners, parents jogging with strollers and owners walking dogs on leashes.

Families can enjoy a picnic lunch in one of the park’s ramadas and then spend the afternoon playing with their young children under the covered playground or in the area’s splash park. Older children can bring their skateboards to spend time in the 15,000 square foot plaza-style park, full of obstacles for skating enthusiasts to enjoy. Dog owners can join the fun, too, as they bring Fido on a trip to the dog park.