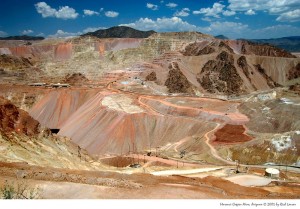 Morenci and neighboring Clifton share a common history of copper mining, and are today commonly referred to as the Clifton-Morenci district. Copper was discovered in Morenci in 1872 and mining began the following year. Both towns have had a cyclical history of booms and busts, and today downtown Clifton is nearly abandoned, with most economic activity centered in Morenci. The area’s largest employer is Freeport-McMoRan.

Geronimo is said to have been born near the current site of Clifton, and well-known southwest impressionist artist Ettore DeGrazia was born in Morenci.