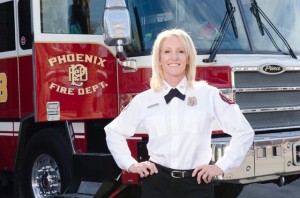 At 16 years old, most teenagers have three things on their minds: fun, friends and finding freedom. What they’re going to do for a living isn’t always at the top of the list. But for Kara Kalkbrenner, it was.

She was a student at Maryvale High School in the 1980s, working at Malcolm’s Department Store selling home furnishings. One day, Mrs. Mallow, one of her regular customers told Kara about her son who was a Phoenix firefighter, who at that time was dating the first female firefighter to work for the City of Phoenix.  She had a sense of Kara’s kind demeanor and caring personality, and suggested that she look into the fire service.

Kara didn’t know that women were just starting to become firefighters. She had plans of following in the footsteps of her mother and grandmother who were both nurses. Her mom worked in the emergency room. Kara knew about what doctors and nurses did for critical patients, but wanted to know more about what firefighters did to help save lives before they made it to the hospital.

Within the year, Kara volunteered to be a Phoenix Fire Cadet, learning the ropes at the fire stations. She finished high school and enrolled in fire science classes and eventually got her degree. By the age of 19, she graduated from an intense academy. At the time, there were only 20 female firefighters at the department, and she was one of the youngest. Fast forward more than 30 years later. Not only are there now more than 85 female firefighters in Phoenix, but that young and eager cadet is now the first female fire chief of the sixth largest city in the nation! 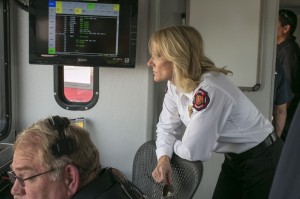 “I have been extremely fortunate to have served alongside some of the bravest and most interesting people on the planet.  Firefighters by nature are unique,” said Kara.   “To be given the training and tools to now lead the Phoenix Fire Department is an honor and privilege.”

She isn’t the kind of chief who manages from behind closed doors. At a three alarm hazardous material fire this year in south Phoenix, Kara was quickly on scene providing support with her team of command officers. Some of Kara’s most rewarding work with the department has come from riding in the backseat of a fire truck, responding to fires and helping sick people.

The chief is married to Assistant Fire Chief Kevin Kalkbrenner, who manages the Office of Homeland Security and Emergency Management in Phoenix. Not only is he a tremendous support, Kara’s mother and grandmother were there as well, supporting her decision to enter a male-dominated profession.

Kara is one of a handful of women in the nation who manage major metropolitan fire departments. After a national and competitive recruitment, she was sworn in as fire chief in late 2014. She leads a robust organization that operates around the clock, consisting of nearly 2,000 diverse employees, and manages a $306 million budget.

Recently, Kara ran into Mrs. Mallow and thanked her for the talk they had 30 years ago at Malcolm’s. Not only did that ambitious young woman become a firefighter, she became fire chief.

“With the right inspiration, skills and knowledge, you can do anything.”