Congratulations to Arizona city and town police officers on commendable efforts that were recently recognized! 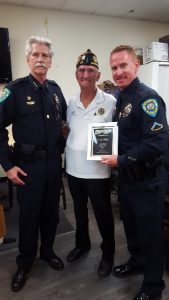 Apache Junction Police Department Officer Wesley Kelley was recently named the Officer of the Year by the local American Legion.

Kelley was given the honor on April 9 by American Legion Post 27.

American Legion posts nationwide name officers of the year. The American Legion then annually selects a National Law Enforcement Officer of the Year Award. It is awarded to a well-rounded law enforcement officer who has exceeded the duty requirements expected of his or her position and has demonstrated a distinct pattern of community service coupled with professional achievement, according to the American Legion website.

“It is always an honor to have one of our officers recognized by one of armed service organizations,” said Police Chief Thomas E. Kelly. “It is especially humbling as these are the same people that have previously placed themselves in harm’s way in defending our country.  Officer Kelley is one of those officers that requires minimum supervision and is respected by his peers. He presents himself well and treats all with dignity and respect as stated in the Apache Junction Police Department’s mission statement. Very proud of the recognition.” 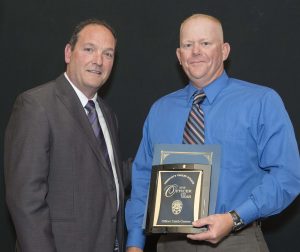 The Prescott Valley Police Department also held its annual police recognition awards. The Officer of the Year was announced as Officer Caleb Cozens.

A team player, Officer Cozens consistently produces a high quality of work, especially in the handling of drug investigations. He is a leader within the department in drug arrests and is always willing to take on extra work. Over the last year Officer Cozens has written 83 citations/warnings, written 262 reports and supplements, and made 131 arrests.

The Town of Prescott Valley also honored other officers with awards: 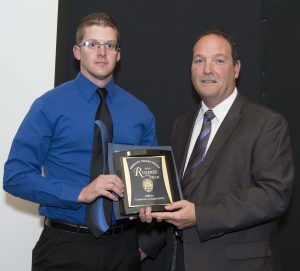 2016 Rookie of the Year – Cameron Loughmiller

2016 Civilian of the Year – Jerry Ferguson

2016 Volunteer of the Year – Dave Demski