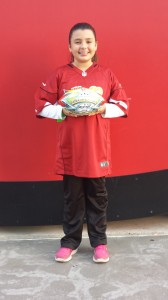 Mia Amundsen’s rise to football fame pretty much began with the Goodyear Parks and Recreation Department – and a lot of dedication.

The Goodyear girl, who is a fourth grader at Palm Valley Elementary School, ended the National Football League’s prestigious Punt, Pass and Kick competition by finishing first to win a state championship.

She scored 129.5 points, the best in the girls’ 8-9 year-old division in a portion of the football program’s state championships held on the field of University of Phoenix Stadium during the Arizona Cardinals and Kansas City Chiefs game on Sunday, Dec. 7.

The Punt, Pass and Kick Program has been recognized by the NFL for more than 50 years. The free competition gives boys and girls ages six through 15 the opportunity to demonstrate their skills in punting, passing and place kicking.  Each participant is given one punt, one pass and one kick to accumulate a score.  Scores are received and calculated with distance and accuracy providing the final scoring distance.

Mia, who is the daughter of Ty and Diane Amundsen, advanced to the state competition after placing first in the Punt, Kick and Pass sectional competition at Sahuaro Ranch Park in Glendale on Nov. 1. 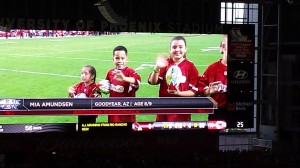 For her state championship, Mia was shown on the Jumbo-Tron video screen and awarded a football for a trophy during the third quarter of the Cardinals’ game. 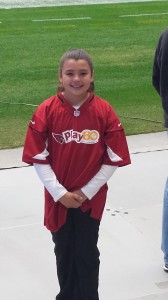 Mia also plays volleyball, basketball and softball, and also is a member of her school’s chorus.

Her mother said that she became interested in the program when it was held at her school in September.

“She just thought it would be fun to give it a try for the fun of it,” Diane Amundsen. “This was her second year of participating in the program. She’s a busy one.”

Competitors begin competing at the local level with high scores advancing to a sectional competition.  Goodyear’s local competition was offered by the Parks and Recreation Department and held at Goodyear Ballpark on Sept. 30.  The four top scores from the five sectionals in each age division for both boy’s and girl’s advance to the state competition held at the University of Phoenix Stadium prior to an Arizona Cardinals game.

All NFL teams host a state competition with the four highest scores in each age division advancing on to the National Competition usually held prior to an NFL playoff game (city yet to be determined).  During each competition participants begin with a new score of zero.