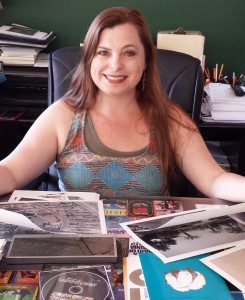 When Dr. Denise Bates moved to Goodyear from DowntownPhoenix nine years ago, she wanted to learn more about the heritage of the city she and her family moved to. Now, Bates is part of a push behind the Goodyear Mobile Museum that is gaining momentum.

After working closely with the Three Rivers Historical Society and local historian Sally Kiko to acquire pictures for the Images of America series book about Goodyear in 2012, Bates wanted to take the city’s history lesson to another level, so to speak – a visual element that would be available at city events and for organizations to see.

So what did Bates do? A professor at Arizona State University who holds a doctorate in history, she later became a member of the Goodyear Arts and Culture Commission and added a historical aspect to the group. Bates began putting together large vintage photographs on portable panels that told the city’s history. Truly a grassroots effort, she expanded on the idea from the former history trail project that was started in partnership with the city, the Maricopa County Parks and Three Rivers Historical Society a number of years ago.

Drawing from the archives of the Three Rivers Historical Society and the collection of Goodyear resident Gloria King, who operated the museum, Memories, the Goodyear Mobile Museum became a reality. 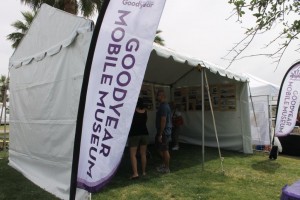 “We’re taking the history to the people instead of waiting for the people to come see the history,” Bates said. “It’s been an ambitious project.” 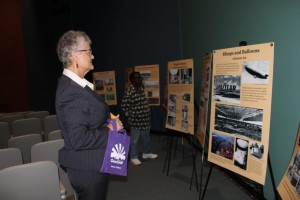 Those images now can be seen on 20 different displays, each depicting Goodyear’s beginnings through its founder – Goodyear Tire and Rubber Co. Executive Paul Litchfield, the town’s history in cotton growing, and its rich history in defense and aerospace industries through Goodyear Aerospace and Lockheed Martin. Then, there’s the story of Goodyear’s rapid growth just before it became the spring training home of the Cleveland Indians and Cincinnati Reds.

“I’m a firm believer in that you must know the history of the city where you live,” Bates said. “It’s important to share it with others. Some of those facts about the history that are interesting to know: Why is the city named Goodyear? Who were some of its famous residents? History is people; it’s places.”

“Goodyear has a distinct identity, and the Mobile Museum demonstrates who we are,” Bates added. “It reflects Goodyear and the innovation it represents.