The La Forge brothers will always remember mom and dad’s love and hard work raising five boys, on a Phelps Dodge Smelter payroll, in the 1940-1950’s. While attending elementary school, poverty was prevalent, but the boys were comfortable wearing patched hand-me-down coveralls and the thought of being materialistic never entered their minds. Nothing at home seemed out of place.

Later during their school years, the war efforts in Korea found Councilmember Ben La Forge’s older brothers, William and Edward Jr., feeling a need to leave high school and enlist in the army to join the war efforts in Korea. LaForge was saddened by their departure, realizing that pride and prejudice is found in every war. Although the family was proud and overjoyed when brother Bill came home unharmed, they were extremely saddened when brother Edward fell as a casualty of war. While basic needs were never lacking, the frugal ways of La Forge’s mother and father enabled them to save money and further their children’s educations. La Forge’s brother Bill chose New Mexico University, brother John went on to Northern Arizona University, and  Ben enrolled at Arizona State University with his sister Camille.

Following college, he found employment with the City of Douglas and retired as Public Works Director in 1996 after 34years of service. During his career, La Forge served intermittently as president and member of the DouglasUnified School District board for 14 years. Having this elected position instilled in him the desire to serve in an even greater capacity, as city councilmember. 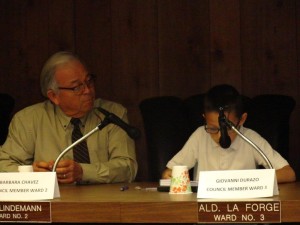 “I turned out to be the only non-educator in the family,”says Councilmember La Forge.  “However, my political science major served me well.”

As a retired city administrator he could help further develop and design purposeful quality of life issues needed within the city. Being an open-minded individual, he realized his biggest resource would be constituents and the people in the community. His dedication and conscientious efforts are apparent in the awards that he has received during his tenure, which he notes are “equally shared.”

Governor Bruce Babbitt appointed the councilmember to the Arizona Department of Transportation Advisory Board and the city was also bestowed with his award for energy conservation. Governor Castro bestowed his gratitude during a tumultuous time for Councilmember La Forge’s efforts in renaming the most historical park in Douglas in his honor. Governor Janet Napolitano recognized his public service efforts and even proclaimed January 24, 2008 as “Ben La Forge Day.”In addition, the League of Arizona Cities and Towns presented the councilmember with a service award, a significant highlight to his career.

Councilmember La Forge says that as an elected official, he has been very fortuitous to have found common ground and support from his colleagues. In relationship with his colleagues, they renewed interest in improving city properties, a $15 million dollar Advanced Center of Technology, a call center, was created and now employs 350 people. On Main Street, the former Phelps Dodge Mercantile building was purchased, renovated and remodeled and is now occupied by Cochise County serving as their local government center. Through joint efforts by the Douglas Unified School District and the City of Douglas, a modern facility, The Douglas Aquatic Center, was also realized.

Councilmember La Forge said, “Even though I find myself in a position to be term-limited by the Douglas City Charter that restricts me from holding office third time, I will find myself deterred from continuing to serve the fine City of Douglas that I’m so proud of.”