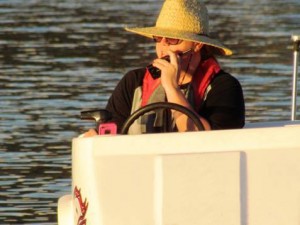 Born and raised in the city where she now works and still calls home, Alicia grew up in Tempe and spent her high school years playing varsity basketball.

Coming of age at a time when female athletes were finally starting to get the attention they deserved, Alicia saw first-hand how this recognition and the earlier passing of Title IX would come into play.  As colleges and universities were recruiting to fill spots on sports teams, San Diego State University came calling. They were adding a women’s rowing team to their collection of athletics and were recruiting female high school athletes.

Though she had never rowed before, Alicia was a respected athlete who jumped at the opportunity to move to San Diego and try out for their varsity rowing team. A year later, she was attending SDSU on a full ride rowing scholarship. She was the very first person in Arizona ever recruited to row at the collegiate level.

Meanwhile, Alicia’s hometown was undergoing some changes of its own. Discussions about the creation of an urban lake in Tempe had been going on for years and in 1999, during her freshman year at SDSU, Tempe Town Lake was filled.

Alicia enjoyed being out on the water and after graduating, she was brought on as an assistant rowing coach at SDSU. She spent two years in that position before becoming the director of rowing at the Mission Bay Aquatic Center in San Diego. The center, run by the State of California, gave Alicia her first taste of working with local government.

While she had come to fall in love with the City of San Diego, Alicia returned home to attend law school. In the midst of applying, she found a job posting as an assistant boating coordinator for the City of Tempe’s Tempe Town Lake. It was the perfect position.

As the senior boating coordinator, Alicia is essentially responsible for any activity that happens “on top of the water.” She oversees the boat house at Tempe Town Lake, which provides private storage for people to keep boats at the Lake. The City of Tempe offers recreation classes on the lake and Alicia manages rowing, kayaking and stand up paddling, in addition to hosting corporate, youth and teambuilding events. The lake also hosts three major regattas, which Alicia oversees. She also supervises junior rowing, which brings together students from all over the Valley. They row five days a week and travel across the country to participate in competitions. Many of these junior rowers hope to find success at the collegiate level, just as Alicia did.

And like Alicia, maybe one of those junior rowers will find their own perfect job someday. One where they can stay on the water all day, interact with the boating community and volunteers, and serve the city that they call home.