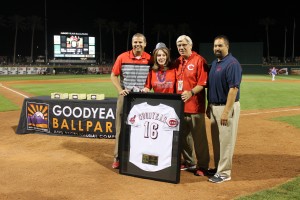 Jean Wilson of Las Vegas, who grew up in the west Cleveland suburb of Westlake, Ohio, was recognized as the 1 Millionth Fan at Goodyear Ballpark in the middle of the fourth inning during Saturday night’s attendance record, sold-out Cleveland Indians spring training game against the Chicago Cubs (11,616). She was showered with confetti and a glittery hat as she jumped up and down in disbelief and excitement.

Wilson, a retired physical therapist and lifelong Cleveland Indians fan, also received a gift basket, a special jersey with the Reds and Indians team logos on the sleeve and won a trip to where else? Las Vegas. What are the odds of that? After the end of the Indians 10-5 win over the Cubs, Jean was taken onto the field where she pulled envelopes out of a basket to win a chance at winning $1 million, $10,000 or a trip to Las Vegas.

Jean and her husband, Craig, attend two Indians spring training games each year since Goodyear Ballpark opened in 2009. In fact, the screensaver on her cell phone is the 2016 Cleveland Indians schedule.

“I can’t believe it, I just can’t believe it,” Wilson said of being the 1 Millionth Fan. “This is one of the greatest things that ever happened to me. Win or lose, I’m an Indians fan. I want to see them win the World Series.” 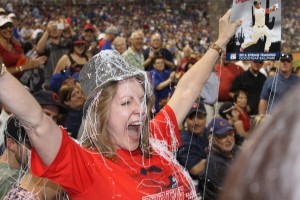 Jean’s husband, Craig, said, “This is great. It doesn’t get any better than this. When we were coming into the game, Jean was talking about the 1 Millionth Fan – and she’s it. This is uncanny.”

In 2010, she also threw out the first pitch at a regular-season Indians game at Progressive Field, a birthday present from her sister.

Pictured in the fourth picture are Jean Wilson and her husband, Craig, who met each other in Westlake.