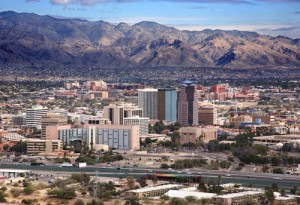 Downtown Tucson is a hub for University of Arizona students, residents, businesspeople and visitors to enjoy the unique attractions and gorgeous weather. Photo from City of Tucson

A southern Arizona paradise, Tucson draws visitors throughout the year to encounter its unique attractions and gorgeous weather. The city embraces its position as a tourism hot spot, as tourism continues to be a significant driver of the local economy. Visit Tucson is a high-performing organization that works diligently to bring tourists, conferences, trade shows, and sporting events to the Tucson area. Tucson Mayor Jonathan Rothschild and the City Council have found a way to provide additional funding to Visit Tucson by having them share equally with the city any lodging tax dollars over and above current levels.

The continued renewal of downtown will no doubt bring even more visitors to the Tucson area. A proposed 136-room, $36 million upscale boutique hotel is proposed that will forever change the landscape in downtown Tucson and will additionally generate an influx of tourism dollars. Another highly anticipated hotel project will bring another 180 rooms right to the Sunlink Streetcar Line. 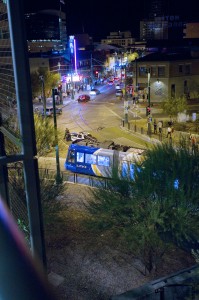 The Tucson Sunlink Streetcar is a 3.9-mile streetcar that connects major activity centers in the city. The streetcar saw its millionth passenger in May 2015. Photo from the City of Tucson

The City of Tucson is also fast becoming known as a logistics center due to I-10, I-19, and proximity to Mexico, Union Pacific Rail Line, the Tucson International Airport, and the Port of Tucson. In the International trade arena, the city has partnered with Visit Tucson to utilize their office in Hemosillo, Sonora as an extension of the economic development office located in Tucson. The city’s international trade specialist travels to the office monthly to meet business owners interested in exploring how to expand into the Tucson market. 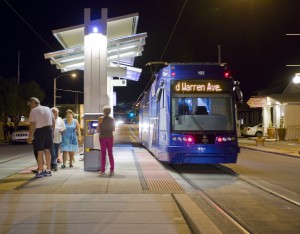 The Tucson Sunlink Streetcar. Photo from the City of Tucson

Additionally, the city collaborates with Pima County and supports plans to construct a new limited access road from I-19 to I-10 called the Sonoran Corridor. This large infrastructure project will open up large tracts of land for industrial uses in the future, and will further solidify the Tucson region as a prime logistics center.

The city’s purposeful partnerships with other local organizations continue to bring more business and more visitors to the downtown area.

Downtown Tucson continues to be one of the hottest development markets in the region. City infrastructure expenditures and the Sunlink Modern Streetcar are certainly primarily contributors to the private investment the city is now experiencing. Downtown Tucson has been transformed in the last few years thanks to well-placed public and private investment dollars. However the lure to downtown extends beyond on-trend restaurants and housing. The area has welcomed many new businesses from the well-established to creative newcomers. These newest professional tenants have generated new construction, converted warehouses and breathed new life into historic homes and buildings. They are the next wave of newcomers to downtown Tucson and their presence will attract talented entrepreneurs and high-quality jobs to the available office space downtown. 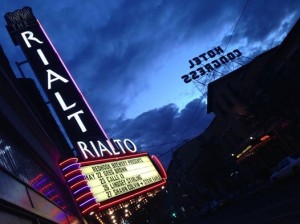 The Rialto Theater is a mainstay of the Downtown Tucson area. Photo from the City of Tucson

The City of Tucson has driven the revitalization of downtown. Policies and incentives put in place by the mayor and city council have been geared toward turning downtown into an economic development engine. The city currently has 21 incentive tools that have made new development projects a reality in downtown.

Students are also injecting life into downtown like never before, with students from the University of Arizona’s Eller College of Management using co-working space downtown to house their student-run companies. Student-run businesses are part of a burgeoning innovation district and shared work environments are quickly becoming the new way to office for young professionals and startups.

The City of Tucson has also established the Small Business Assistance Line, which attracts callers on a daily basis. The help provided ranges from how to obtain a city business license to how to establish a new business in Tucson. The Economic Initiatives Office also staffs the Small, Minority and Women Owned Business Commission, which meets monthly to facilitate the success of small businesses. 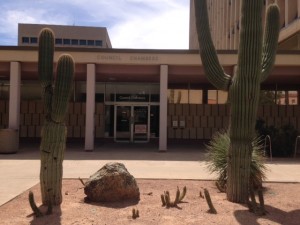 Tucson City Hall. Photo from the City of Tucson.

The Tucson City Council have led the economic development effort for the city by proposing incentives and assistance programs, bringing new businesses to the city and supporting those that are already operating there.

Downtown Tucson is once again becoming a vibrant urban core and both seasoned and young professionals want to be part of its future.