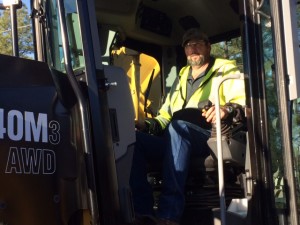 When you think about some of the toughest jobs in Arizona’s cities and towns, snow plow driver probably isn’t the first image conjured up within the sunny state. But for Mike Stress and other members of the Flagstaff streets team, they understand that snow has a real presence in our state and it’s up to them to keep the streets free and clear so that residents can get home safely.

A hometown boy, Mike was born and raised in Flagstaff and attended Coconino High School where he showed his strengths on the ball field. Right out of high school, he had the opportunity to try out with the Milwaukee Brewers baseball team.

He started with the City of Flagstaff in 1990 as a temporary employee in the parks department where he cleaned sidewalks at night and worked on the softball fields during the day. As he worked his way through the city, Mike has spent time in several departments, including a year in the city cemetery.

Once he transferred into the street operations as a heavy equipment operator, Mike found where he belonged. He worked his way through the ranks before being promoted to a supervisor in 2008.

Mike is responsible for scheduling the work of the Flagstaff streets crew on a daily basis. He also trains employees on various pieces of equipment and is involved with the fleet shop, communicating with mechanics to ensure equipment is ready and working properly when needed. 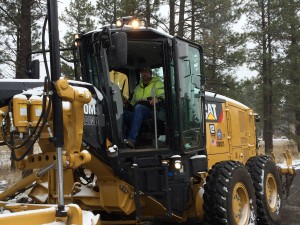 When Mike’s job really gets interesting is when the snow falls. A typical snow day for the Flagstaff streets crew includes the deployment of 32 pieces of equipment on a big storm. During an event, the crews communicate between two shifts to ensure that all main and critical routes are being attended to, as well as managing all citizen complaints and any issues that may pop up.

Mike recalls a particular incident in 2010 when Flagstaff received five feet of snow in a 48-hour period.

“The snow was so heavy that the streets crew could not keep up with the snow fall amounts,” he says.

Mike was tasked with looking for outside help from private contractors to help plow the routes so the public could get out. They had to help haul off the snow from the downtown as well as all the cul-de-sacs around the Flagstaff area.

In his 25 years with the City of Flagstaff, Mike has shown his capabilities as a streets supervisor. In 2012, he was selected to be a member of the Arizona state incident management team as equipment inspector.

In rain, sleet, snow, hail or sunshine, Mike and the Flagstaff streets team are working to ensure the roadways are safe for travelers.

While Mike enjoys the ability to start a project and oversee it to the end, he truly loves his job because of his capability to contribute to his hometown community of Flagstaff.