All Aboard! Goodyear to Attempt World Record for Largest Soul Train Dance

The city of Goodyear wants to see you move to the groove this 4th of July.

During its 9th annual Star Spangled 4th celebration, Goodyear is inviting the public to get on board and be part of The Largest Soul Train Dance.* 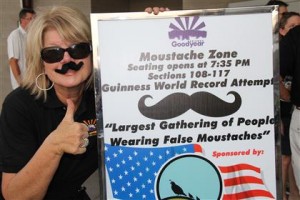 There were 1,957 people who wore a false mustache to set a record for the largest group wearing them, surpassing the previous record of 1,532 fake mustaches worn at the Gilda’s LaughFest held in Grand Rapids, Michigan on March 7, 2013, according to Guinness World Records.

“We set an expectation by breaking a world record last year – we just had to attempt another one,” Debbie Diveney, business-operations supervisor of Goodyear Ballpark.

Image courtesy of The Huffington Post: http://huff.to/VnOyRg
This photo was taken at the Philadelphia World Record attempt.

Beginning at 7 p.m. on Friday, July 4, event organizers at the ballpark will start calling down people to begin lining up for the Soul Train. The Party Crashers will get the attempt underway with live music beginning at 7:30 p.m. Although there are expected to be several hundred people in the Soul Train dance, no more than two people can dance together along the Soul Train line.

The current record for the largest Soul Train dance is 291 people set by the Philadelphia Soul Train Line Dancers in Feb. 13, 2012 at the Art Museum in Philadelphia. The record took three and a half hours to complete.

“We believe we can smoke that record,” said Debbie Diveney, “Like last year’s Guinness World Record we set, this is one that involves group participation, which will be a lot of fun. We want everyone to be a part of the movement.”

Goodyear’s Star Spangled 4th event, which averages about 15,000 attendees every year, is presented by Fry’s Food Stores and sponsored by Palm Valley Pediatric Dentistry, Dunn Orthodontics, West Valley Pediatric Dentistry, Snyder’s of Hanover Pretzels, the Cleveland Indians and Cincinnati Reds. Other activities include the Wet Zone and Fun Zone with inflatable slides and bouncers, corn hole and a free photo booth. Food vendors will also be present in various locations throughout the event. Fireworks will start after dark.

Gates for the event open at 6 p.m. and Goodyear Mayor Georgia Lord, who will be accompanied by City Council members, will kick off the countdown to fireworks.

*In case you forgot what a Soul Train Dance entails, this is the funky dance that requires those involved to form two lines with a space in the middle for dancers to strut their stuff and dance down the line in consecutive order.

Georgia Lord, Mayor of Goodyear Arizona, and AZ Cities @ Work appeared on Channel 3’s Your Life A to Z on Saturday, March 8, 2014 touting the benefits of Cactus League Spring Training to our cities and towns and the state.

As the City Manager of Goodyear, Brian Dalke is always thinking about how to make the city better into the future. His forward-thinking attitude has been the guiding aspect for recently adopting a new city strategic plan and implementing a city-wide performance measure program.

He is also focused on the city’s residents, working with city employees to ensure that they are satisfied with the work their city is doing. He works closely with the Human Resources Department to develop an employee appraisal tool that is aligned to core customer service values. He has also started an initiative for Priority Based Budgeting, which will help facilitate meaningful communication between Council and staff about resources and their city initiatives.

Before becoming City Manager, Brian spent twenty years working for the city, learning the culture of Goodyear. He joined as an Economic Development Director, leading the small city as it made its mark in the West Valley. In his role there, he helped charge on many development agreements and projects that still continue to sustain the city.

His role in development continued as Deputy City Manager, where he oversaw key projects like the Estrella Falls Regional Mall agreement, which is slotted to bring a 1.2 million square-foot regional shopping center to the West Valley in 2016. In addition, the was instrumental in the development of the Goodyear Ballpark and Recreational Development Complex, which serves as a year-round economic engine for the community, and a venue for many events for the community to enjoy.

Brian likes to say that in Goodyear, they are in the “forever business,” and his guidance is ensuring Goodyear will be prosperous for many years to come. He is one of the many reasons Arizona Cities Work!