We are excited to have so many of our Arizona cities and towns participating this year, including: Chino Valley, Florence, Gilbert, Litchfield Park, Peoria, Sierra Vista, Surprise, Tempe and many others!

Find out how your city or town is celebrating and participate in Arizona Cities & Towns Week by using the hashtag #AZCityWeek on social media. 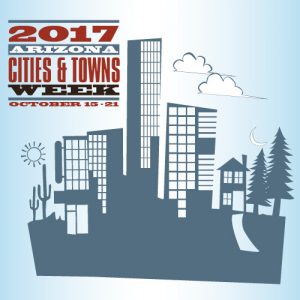 Arizona Forward awarded its prestigious Governor’s Award for Arizona’s Future to the City of Phoenix on Saturday for its landmark 2017 agreement with the Gila River Indian Community to preserve endangered Colorado River water in Lake Mead. In all, Phoenix received nine awards at Arizona Forward’s 37th Annual Environmental Excellence Awards, including four Crescordia Awards, the highest honor in each category.

Mayor Greg Stanton and Phoenix City Council unanimously approved the Colorado River Conservation Agreement in June in partnership with the Gila River Indian Community, the U.S. Bureau of Reclamation and the Walton Family Foundation. Under the agreement, Phoenix works with the Tribe to preserves 13 billion gallons of its yearly portion of Colorado River water in Lake Mead, which helps preserve water levels in the dangerously over-allocated reservoir.

“To ensure a long-term water supply for our city and state, Phoenix must lead by working with tribes and other communities on creative solutions and smart policies,” Mayor Stanton said. “Arizona Forward’s recognition for this landmark agreement – as well as for our other innovative sustainability efforts at the City – means the world because it shows that Arizonans get it and are committed to climate resilience.”

“Through partnerships, Phoenix has been able to leverage innovative ways to improve our sustainability efforts,” said Councilwoman Thelda Williams, chair, Transportation and Infrastructure Subcommittee.  “We’re grateful to our many partners, stakeholders and staff who have worked hard to achieve outstanding results.”

“I was thrilled to be present at this wonderful annual event to celebrate all of the hard work and innovation that the city of Phoenix continues to accomplish,” said Phoenix District 3 Councilwoman Debra Stark.

Since its inception in 1969 as Valley Forward and expanding statewide in 2013, Arizona Forward has brought business and civic leaders together to convene thoughtful public dialogue on regional issues in an effort to improve the sustainability of communities in the state.

For more information about Arizona Forward or the awards, call 602-240-2408 or visit arizonaforward.org. 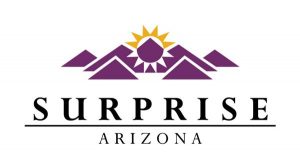 The City of Surprise Community & Recreation Services Department has received accreditation by the National Recreation and Parks Association. The Association recognized Surprise’s efforts to provide high quality parks and recreation services and experience to its residents and visitors.

The Commission for Accreditation of Park and Recreation Agencies (CAPRA) has issued a five year accreditation to the city’s Community & Recreation Services Department after meeting more than 140 standards ranging from hiring practices to marketing techniques, from park planning to program implementation.

Community and Recreation Services Director, Donna Miller said the department is “excited for the accreditation”, which came after a preliminary application, self-assessment study and an onsite visit by peer review performed by a CAPRA visitation team. The three-member visitation team spent several days evaluating the departments administrative and operation practices.

“The accreditation stamp reaffirms that we are among premier agencies in the country,” said Miller. We have proven that our department follows proper practices and procedures in the administration of our parks, facilities and programs.”

The application and accreditation process was intensive, lasting more than 14 months. The final step was a hearing through the commission in September. Immediately following the hearing city staff received the good news and are thrilled to be recognized for following these important standards.

The public will benefit from the accreditation by knowing that the city is adhering to best practices in the field of parks, facilities and programs. It also shows partners, potential funders and the public that Surprise operates under such standards.

“The best part of this process is that all of the staff was involved, which provides ownership and pride in the programs and services in which they offer to the residents,” said Miller.

Water professionals from all over the country were on hand Sept. 12 when the city of Goodyear’s Vadose Well Injection Project was selected as the 2017 Project of the Year Award by the national Water Reuse Association.

The project consists of wells that take treated water from the city’s reclamation facility and directly pump it into the ground. This allows the city to ‘bank’ water for use during times of need.

The award comes with the water industry’s acknowledgment of the significant contributions the city of Goodyear continues to make to advance water reuse. Another award-winning city water reuse program is the ‘Brine Wetland Feasibility Project’ which takes otherwise unusable water and proved it can help nourish native vegetation, therefore creating natural wetlands.

“We know that ensuring a sustainable and reliable supply of water for the city’s future growth is essential,” said Mark Holmes, water resources manager for the city of Goodyear. “That’s why we continuously focus on how to maximize the water we have. Water reuse is a huge part of our efforts, along with conservation and partnerships.”

The city of Goodyear, ranked as the fourteenth fastest growing city in 2015 by the U.S. Census Bureau, recently announced a historic agreement with Salt River Project that, for the first time, will bring surface water to the far West Valley further expanding and diversifying the city’s water portfolio. For more information about the city’s water initiatives, visit www.goodyearaz.gov/h2o365.

WateReuse is an organization dedicated to educating and advocating for water reuse. Members include water utilities, businesses, government agencies and not-for-profit organizations dedicated to recycling water to ensure communities have a safe, reliable and cost-effective supply of water. More information is available at watereuse.org.

This week is Arizona’s 13th Annual Cities & Towns Week. It’s a week to celebrate and appreciate the work of Arizona’s 91 municipalities. Cities and towns work everyday to ensure safety, protection, well-being, convenience and enrichment for all  those who live, work and play in their communities. 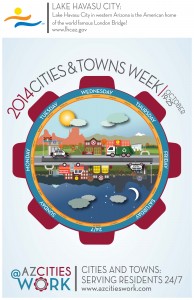 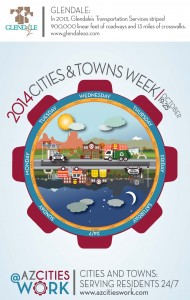 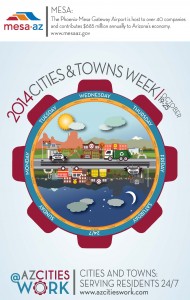 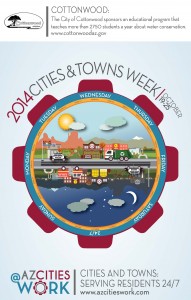 When you woke up this morning, you probably took a shower, set out your recycling bin or drove to work on a safely paved street with working stop lights. Maybe this afternoon you’ll hit up a town park to enjoy this beautiful weather with your kids or check out a book at the city library. This evening, you can sleep assured knowing that police, fire and safety services would be there if you needed them.

Cities and towns are always working, from sun up to sun down, to ensure safety, protection, well-being, convenience and enrichment for all citizens to live, work and play. To celebrate the great things cities and towns do, Arizona will be celebrating its 13th Annual Cities and Towns Week, October 19 – 25!

Arizona Cities and Towns Week is set aside each year to provide citizens with important information about the services and programs provided by their city/town, and to introduce the employees that deliver them.

Many of Arizona’s cities and towns are celebrating this week through a variety of community events, proclamations and outreach to residents. Contact your local city or town to find out how you can celebrate with them!

For more information on Arizona Cities & Towns Week and a toolkit with ideas for participation, click here.