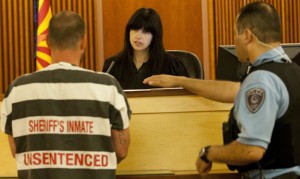 Growing up just outside of Chicago, Nicole Laurin-Walker was a serious student of classical piano and competed regionally. Her studious manner led her to attend the University of Michigan where she received a degree in psychology and later the University of Arizona College of Law where she received her law degree. It was there in Tucson that she received her first taste of courtroom experience as an oral argument contest winner at the law school. She also spent time working as a Haitian asylum petition writer during a summer in Miami, a legal intern for Motorola in Phoenix, and an intern at the Pima County Public Defender’s Office. After law school, she worked as a bailiff at the Maricopa County Superior Court while she studied for the bar exam.

Her extreme focus led Laurin-Walker to become the Town of Gilbert’s first assistant town prosecutor in 1994. Back then there was only one prosecutor in the office, and she appeared before one judge. Her hiring at the time doubled the size of the prosecutor’s office!

As a prosecutor, she was in the Gilbert Municipal Court every day, appearing before Gilbert’s sole judge, David Phares, handling everything from probation violations to jury trials. After a bit, she moved over the Maricopa County Attorney’s Office and prosecuted felonies before returning to Gilbert to write appeals for the Prosecutor’s Office. After her return, Judge Phares decided it was time to add a second judge to the court and Laurin-Walker applied, despite being only 27 at the time. She was offered the job and has held the position ever since.

When a person is accused of committing a misdemeanor in the Town of Gilbert, Judge Laurin-Walker begins her duties. When the individual first appears in court, her job is to make sure they understand the charges they face and the rights they have, appoint them an attorney if they are eligible, listen to the victim’s concerns, and then set some release conditions to make sure the accused person will appear at future court dates. If a person pleads not guilty, she will set the case for trial, making decisions before the trial about what evidence should be allowed and what should be kept out. During an actual trial, she questions jurors to make sure they are fair and impartial, decide which rules of law the jurors will be required to follow, and make sure proper procedures are followed by the parties so that the process is fair to both sides. If there is no jury, Judge Laurin-Walker has the authority to decide if the accused is guilty or not guilty and also give a sentencing, should the case require it.

Laurin-Walker likes to hear people’s stories and try to figure out what drives them and what might change their behaviors. Nothing makes her happier than watching a defendant work his way through jail and counseling probations and see him go to college or get a real job at the end of it all.

True to her musical roots as a classically-trained pianist, Laurin-Walker continued to be a musician alongside all her schoolwork and lawyering. She now sings and plays keyboards in a rock band called The Love Me Nots. The band tours worldwide and has put out six albums. Laurin-Walker says she has gotten a taste of real rockstar success, despite the restrictions she had due to her work with the town. Her colleagues all support her musical endeavors and strive to maintain their own hidden talents outside of work.

“I love working in a place where everyone seems to be doing something fascinating outside of work hours,” said Laurin-Walker. “It gives us a better perspective overall.”