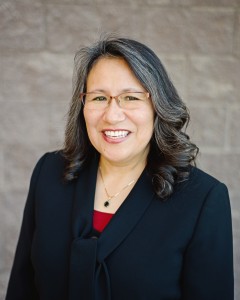 The city clerk is one of the essential positions in municipal government.  Depending on the size of the city or town, the city/town clerk’s responsibilities are varied and often perform functions of city manager, finance officer, human resource director.  In the City of Avondale, the city clerk’s functions include records management, elections, council meeting agenda and minute preparation, public records requests, liquor licensing, annexations and special event permits.

Carmen Martinez was hired as deputy city clerk in 2002, and promoted to city clerk in 2008. She has advanced the functions and services in the city clerk department in so many ways. Her staff is literally the “face” of Avondale – as they manage and staff the front desk in the lobby of city hall, greeting thousands of people who come through the door each year, answering the telephone to the main city hall line, and more.  In 2007, she brought forth the idea of providing passport processing services at city hall.  Since then, the program has generated more than $1.15 million in revenue to the city.

Thanks to Carmen’s efforts, she has also worked with the United States Citizenship and Immigration Services (USCIS) to host several citizenship ceremonies at Avondale City Hall. The ceremonies, consisting of more than 100 new citizens at each one, are always very moving. Carmen herself has been a keynote speaker at these events, telling her personal story of becoming a naturalized citizen.

When it comes to elections, Carmen has placed a great deal of focus on transparency and voter participation.  In 2008, the city faced a substantial increase in its election costs. In an effort to be accountable to the citizens with their money, the city council approved staff’s recommendation to change the city’s election cycle ahead of the statutory requirement.  This required voter approval.  Carmen recognized this change represented a challenge with respect to independent voters and the need to educate them regarding their choice for a ballot. Working with the community relations department, she conceived the idea of Carmen Electa, Avondale’s own elections ambassador. Carmen Electa is the face of elections in Avondale and she comes out every election to educate voters and their families about voter registration deadlines, issues and choices.  Avondale’s special election was put in the 2008 primary election ballot for voters’ approval.  Avondale chose to host an early voting site for that election and on the last week of the early voting period, saw hundreds of voters each day come into Avondale City Hall to cast their early ballot.

The 2014 primary election was a particularly challenging election in Maricopa County.  There was confusion with polling places; some cities were holding all-mail ballot elections, while others weren’t.  As part of a resident outreach, the city clerk’s department learned that voters would be more likely to vote if voting was more accessible and convenient for them.

“We want to become to GO TO place where any voter in Maricopa County can cast their vote,” said Carmen. “Our staff is knowledgeable, professional and friendly.  Carmen Electa is preparing for the city’s upcoming 2016 primary election.  We will do our best to reach out to voters and educate them and entice them to cast their ballot.”