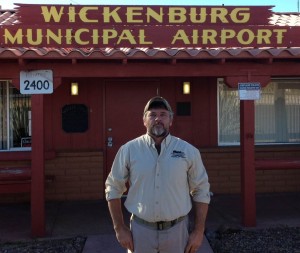 A small-town Kentucky boy, Lee Cox traveled the world and landed at the airport in Arizona’s Wild West. Lee Cox was raised on a farm in Kentucky. At age 17, he enlisted in the U.S. Army as a parachute infantryman and served in combat deployments during Operation Just Cause and Operation Desert Storm/Desert Shield. After leaving the military, he worked in construction and as a gunsmith, later re-enlisting in the Army reserve as an aircraft structural repairman. He also worked as a cable splicer, apprentice electric lineman, certified back country guide, appliance repairman and guest ranch maintenance worker/wrangler, which is what eventually led him to Wickenburg. Landing in the Town of Wickenburg, Cox began as a communication specialist in 2006 with the Wickenburg Police Department. He also worked as a reserve officer and once he graduated from the police academy, was offered a position as a full-time officer. He served five years as a full-time officer, three as the department’s K-9 handler. 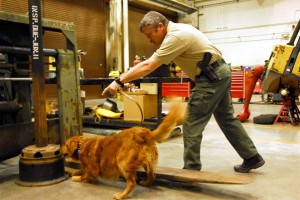 Unfortunately, medical issues prevented Cox from continuing his position as a full-time police officer, which led him to apply for a position as the Wickenburg airport customer service technician. As the airport customer service technician, Cox gets to experience a variety of tasks on a daily basis. Encompassing several areas, Cox is responsible for facility and equipment maintenance, fueling aircraft, answering questions and assisting visitors with their travels to Wickenburg. He says that the best part of his job is getting to meet a diverse array of people from all over the country and world, not unlike many of the jobs he has held in the past. It’s clear that visitors enjoy meeting Cox and learning how a small-town Kentucky boy came to live in the small-town southwest. “I have been asked many times how I ended up in Wickenburg, as my accent gives it away that I’m not from here. I reply that it’s a long story,” says Cox. “Although I have traveled the country and world over the years, seen and done many things, I sometimes wonder how a small-town farm boy from Kentucky found his way to a small town in the desert of Arizona. It’s been a long road that led me here, but I can say without a doubt I am proud to now call Wickenburg my home.”