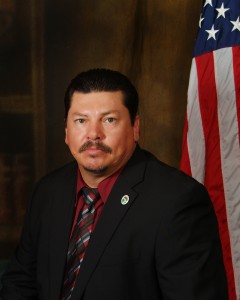 As the second youngest of 11 siblings, Martin Porchas grew up in the City of Somerton, where he now serves as mayor. He attended O.L. Carlisle Elementary School, Kofa High School and AWD Community College. His parents and older brothers and sisters were field laborers.

“I am very proud to say that I was not the first one in my family to attend college or finish high school,” Mayor Porchas said. “I have a brother who graduated from University of Arizona with a bachelor’s degree. My second youngest sister became a nurse, and the youngest received her master’s degree in education.”

Throughout the first 20 years of Mayor Porchas’ life, his family would travel to California in the summers. Some years, he would not get to finish school or the season playing baseball because of the move to California.

“Many of my friends thought itw as awesome to travel to California,” Mayor Porchas declared. “Little did they know, I was not too thrilled about it, but I had to follow my parents. Don’t get me wrong, but when a boy at the age of 12 has to get up at 4:30 or 5 a.m. all summer long to go work in the fields, it makes for a long and not-too-pleasant summer.”

“I am proud and now honored to say that I got to hang out and learn from one of the hardest workers I have ever known in my life – my dad,” Mayor Porchas said.

Family is now just as important to Mayor Porchas, who is married to his lovely wife, Dalila, and is a proud father of two children, Martin Adrian Porchas and Andrea Porchas.