Naming Contest Underway for Eaglet Hatched in Clarkdale this Week 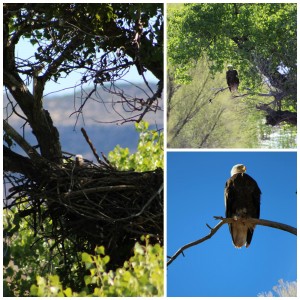 Word is quickly spreading that Clarkdale’s local celebrity Bald Eagle couple, Clark and Dale, successfully hatched a baby eaglet in their nest near TAPCO on the Verde River @ Clarkdale.  In February, 2014, Clark and Dale gained local recognition when their nest was discovered in a tree at the boat launch site that the Town of Clarkdale was developing as a public river access point.

To help insure protection of the nest site, and increase the chances that Clark and Dale would successfully fledge an eaglet, the Town of Clarkdale and land owner Freeport McMoran, Inc. took action immediately, and relocated the public river access point to its new location at the Lower TAPCO RAP (3400 Sycamore Canyon Road).

Unfortunately, Clark and Dale’s 2014 egg did not hatch, nor did the egg they laid in a nearby nest in the 2015 season.  This year, after a tip from Verde Canyon Railroad employees, Nest Watch volunteers documented that Clark and Dale had moved their nest to another new location (near the Verde Canyon Railroad tracks) and a single egg was incubated at the end of January, 2016.

Employees on the Verde Canyon Railroad have continued to observe Clark and Dale alternating shifts on the nest throughout the first quarter of the year, and were the first to report a sighting of the hatched eaglet in early April, 2016!

April will be a sensitive period for the young hatchling, as it will be vulnerable to the elements.  Strong spring winds in Arizona have been known to blow nests out of trees, killing the young hatchlings in the process.  At 4 to 8 weeks (during May), the vulnerability gradually decreases.  The biggest risks during this time occur if nestlings miss feedings or leave the nest prematurely due to disruption.  The period after the nestlings reach 8 weeks old (in early June) is another very sensitive time.   The eaglet is gaining flight capability, but may not be quite ready to test its wings.  If flushed from the nest prematurely due to disruption, the eaglet can die.

While uncharacteristic human activity in the area of the nest could pose disruption, the fact that Clark and Dale chose to nest near the train tracks indicates their tolerance for the daily trips associated with the Verde Canyon Railroad, and those trips should pose no unusual disruption for Clark, Dale and their young nestling.  Passengers on the train will get the enviable opportunity to catch a glimpse of the young nestling as it continues to mature before leaving the nest.  Because other activity in the area could pose a risk to the eagles, the Verde Canyon Railroad has established a Flickr photo page dedicated to watching the progress of this new eaglet!  Those who can’t ride the train to see the baby will have the opportunity to enjoy the progress here.

We’re hoping to see our young eaglet not only survive, but thrive, and take to the air sometime in June.  As we continue to follow its progress, we’d like the public to weigh in to help name the young eaglet.  On-line voting for a name will begin April 11th on the Town of Clarkdale website.